Made my reservation for Historicon.

Big month of selling and reinvesting into another project. I have trimmed the collection to 6 playable projects, with 2 more smaller projects to be painted. Still have half the Slaughterloo collection to be painted, and I need to inventory the huge amount of 15mm fantasy lead on hand.

I feel good about trimming the collection of terrain, figures, and books/rules. It cut my number of projects in half...which should allow some focus and getting each project on the table more frequently. A 2022 goal will be to have a game with every project.

Peace In Our Time

Suffering their fourth defeat in a row, the Todoroni led Unionist forces have sued for peace with the Burrovian led Associates. The savage battle in winter time in the Dark Elf lands could not turn the tide in the war for the aggressors. Who knows how long the armistice will last as rumors of mobilizing units of Orcs, Elves, Dwarves, and Dogs abound.

The battlefield for the next game in my Slaughterloo campaign using Field of Battle 3.

Scenario and battlefield generated using the Seasons of Battle campaign system included in the rules.

The wood markers indicate where each brigade will set up...starting that tonight. A fairly open battlefield. 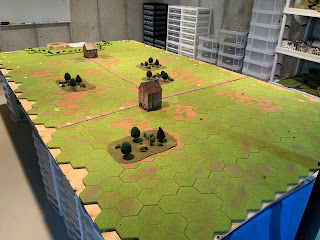 I finished off the Joccian Rats (Scottish), bringing me to the half way point in the project...70 of 140 units done. I will start prepping the Orcs (British) tomorrow with a goal to finish them by end of September. That will put me at the two year point of painting that project, with a year to go. I will still have the Elves (French), Dwarves (Prussians), and Dogs (Austrians) to go.

These are the 5 Infantry, 2 Cavalry, 1 Artillery, and 3 Leaders that will now join the campaign.

I will work on the next battle set up this coming week. 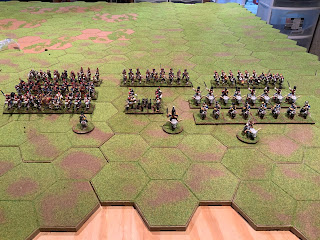 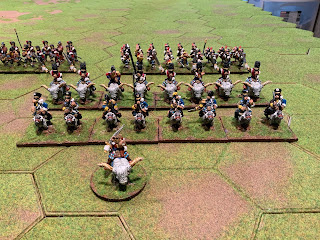 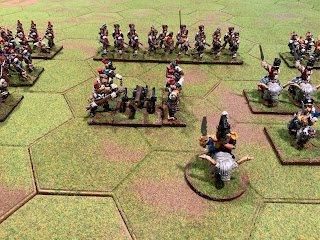 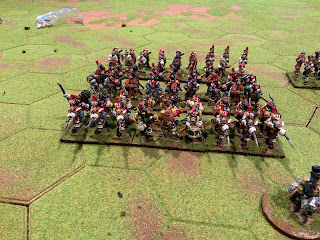 I have been reviewing my project plans with the goal of trimming some off the list, planning the completion of a few, and thinking about what is to come. Wall of text below to capture my thoughts.

Some of my goals:

2- Reduce overall # of projects with the intent of gaming them more often.

3- Meet my period and game type goals...skirmish and mass battle. Horse and Musket, fantasy, and guns.

4- Consider reducing to only 2 scales.

5- Have rules I like to play the project, or it tends to just sit.

6- Adjust my plans to be working on 1 major and 1 minor project at a time to break things up.

2- 1/300 WW2 aircraft: not a particular period of interest, can play at a convention.

4- 28mm plastic fantasy skirmish project with lots of extra sprues: Unsure on this one, I can at least sell off many of the extra sprues. If I do the Burrows and Badgers project, that will meet my skirmish requirement. -----SOLD

5-Song of the Splintered Lands anthropomorphic animals: Great figures, not used much. Will help fund Burrows and Badgers. -----SOLD

6- Zombies (this is a drastic shift...a week ago I was considering expanding this): Small collection (<100 figures), and big batch of Plasticville terrain. I think I found rules that I would like (Last Days), and I almost bought a large number of figures to flesh this out. This one if on the fence. -----SOLD

7- 6mm sci fi: A smaller project, half complete. Need more diverse terrain. I could purchase and complete this project in a few months. I am tinkering with my own rules based off the Panzer Korps WW2 rules. Or I could go the other direction and sell it off. Computer gaming may fit my higher level gaming desire.-----SOLD

1-15mm sci fi: I think I can meet my skirmish gaming with other projects below. Selling this will fund the completion of 1 or 2 other projects.-----  to sell

I will keep these projects:

1- Slaughterloo: I have all the lead on hand, half way done painting (2 years to go). After that, can add occasionally as they release new stuff. I use FOB3. This fills my "horse and musket large battle" itch.

2- 15mm Fantasy: Very large painted collection, and large bin of lead on hand. This will be the major project after finishing the Slaughterloo figures. I use a modified Pulse of Battle/Hostile Realms. Meets my fantasy mass battle needs. There are many additional figures I would love to add to this collection so it will be open ended. I also have some hex based rules using a Battle Lore base that I tinker with every so often.

3- A Very British Civil War: I have platoon+ forces and I like the Combat Patrol rules. This meets my platoon skirmish requirements, indulges my "imagi-nation" desires, and many figures can be used with Pulp too. No planned additions.

4- Pulp: Never a period I was interested in but the Pulp Alley rules are just too good to miss. Figures do double duty with AVBCW. No planned additions.

5- 15mm WW2: 3+ painted companies on hand, no lead on hand. I use I Ain't Been Shot Mum from Too Fat Lardies and can also use these for platoon level (or squad since they are individually based) with Chain of Command or Combat Patrol. No planned additions.

6- 15mm Imagi-Nation: The project that started it all. Dormant for a long time, the collection is complete. The Slaughterloo project has become my go to horse and musket game. No real value in these painted figures since they are "imagi-nation" and not painted historically.  No planned additions.

7- Albedo Anthropomorphic: I have some unpainted figures on hand and the Combat Patrol rules version for these figures. Would be able to do Platoon+ or squad actions. I just love the figures and plan to get more as they are released. This would be about a 3-4 month project to get to maturity. -----I have already bought some of these, so this is an actual project for the future.

8- Burrows and Badgers: While researching expanding my Zombie project, I watched some videos on this game. Great figures, campaign system, Otters (my favorite animal). So much to like. I bought the rule book, now have to decide if I go all in on this additional project. Pro: Only need a few painted figures to start, rule book on hand, relatively low cost, meets my skirmish and campaign likes. Con: Adds to lead pile, need terrain, pushes other projects down the list (Albedo). This would be a 3-4 month project.-----Just bought the whole range of figures.

Posted by Timothy Coakley at 6:36 AM 3 comments:

A great hobby month. Lots of painting, sold off 3 projects, play tested some rules, joined a club, and kept spending in check.

I sold off my 1/300 WW2 aircraft, space ships, and 15mm pirates...plus some surplus buildings, magazines, books, and terrain. I am considering what I will do with the money...I want to reinvest in one of my current projects.

I think I will also sell off the large 15mm sci fi collection.

Reserved my room for Historicon in November. 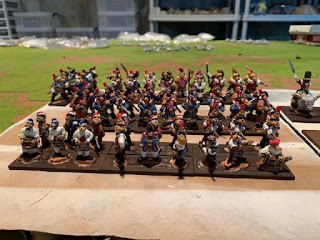 -I will base these when I finish the next two units in April.

Posted by Timothy Coakley at 8:44 AM No comments:

A nice hobby month. Finished up the Dark Elf (Spanish) troops and have the Joccian Rats (Scots) primed and ready.

I have linked up online with the South Jersey Gaming Association (thanks for the warm welcome) and home to get in some in person gaming as things get better. For anyone in New Jersey, look them up.

Peter--- one of the fellas is a FOB fan and has been in your Historicon games...this is a good sign!

I have been tempted by some purchases...more Albedo figures, 6mm sci fi...holding out! 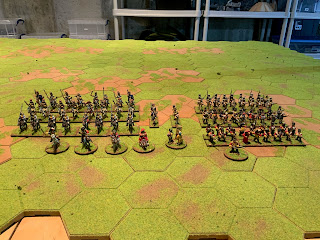