Closing out the year on a roll. Great month for painting, and I got in a game in my Pulp Alley campaign. I hope to continue my progress in the new year. 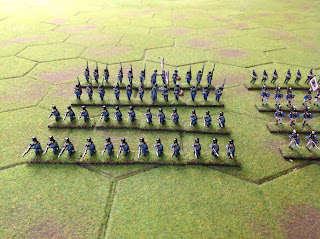 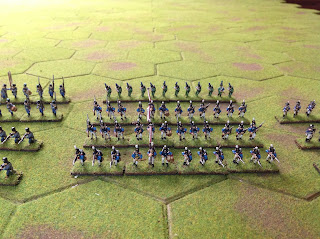 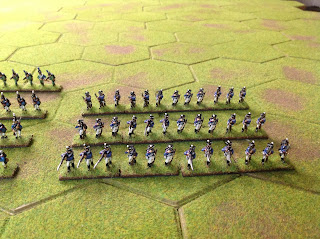 Posted by Katzenstein at 11:14 AM No comments:

Rumble in the Harbor

I played the next game in the Perilous Island Pulp Alley campaign.

All clues so far have pointed the leagues towards a distant port in the far east.

Lady Elaine and the Eastern Brigade led by The Duke faced off against a band of vicious Chinese pirates led by the infamous Chanimal. This was a solo game in which the pirates won a hard fought victory 4 to 2.

Posted by Katzenstein at 3:56 PM No comments:

Merry Christmas to all. A nice haul from Santa to start the day. I have also been getting quite a bit of hobby work done this month.

An annual order of wargames books. The markers/pens will be for an attempt to put some fine details on a few figures. The loot below includes 6 packs (5 figures each) of Pulp Figures . 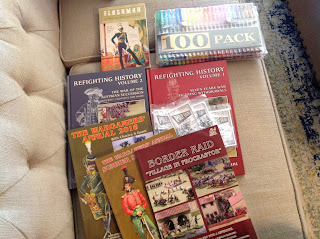 180 figures ready for priming. These are the last of the infantry (15 units) for my Katzenstein OPFOR. 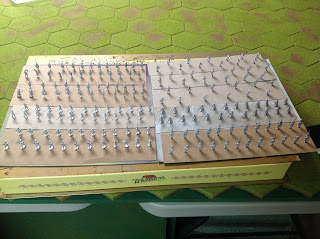 6 completed units for that project. red, white, and blue themes throughout. I will base them up with the next batch at the end of the month. 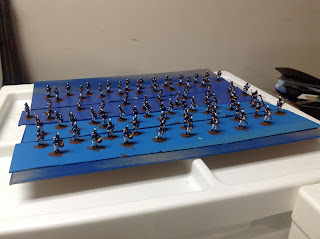 A Pulp Alley game on the table. Using 15mm (18mm) buildings as stand in. 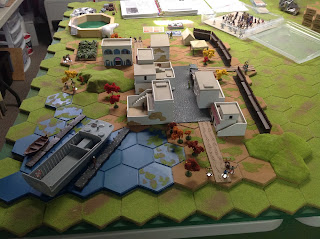 I splurges on a batch of 6mm scifi figures from Brigade Models. They were on sale and I did not expect them to arrive until January. Pleasant surprise to start the holiday week. The resin buildings are very nice. I am looking forward to starting these after the Katzenstein OPFOR are complete (july is my target). 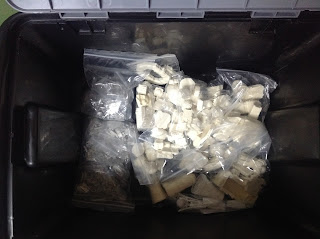 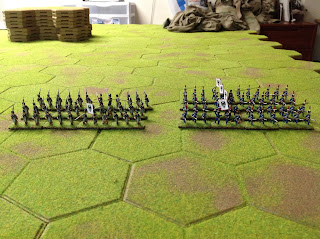 Posted by Katzenstein at 8:58 AM No comments:

I have crossed the 8 year point since I started my adult wargaming. Time flies when you are having fun. I spent a few days at my parents house looking around in the basement (again) for my old Airfix figures. No luck. I will give it one more go when we clean out the crawl space.

During a great vacation in the Turks and Caicos, I read the 10 wargames magazines I stockpiled over the summer, and I read the Hammer's Slammers collection of sci-fi short stories.
I sent my Christmas list to my wife. It contains the usual round of wargames books and, for the first time, some figures (6 packs of Pulp Figures).

Bought a few things from my list...paints, primer, bases, TFL Summer 16 special, the new Pulp Alley campaign and cards. I will get the Too Fat Lardies Winter PDF special in December.

Working on my Katzenstein expansion while planning to start either 6mm sci fi or 28mm zombies. Sci fi has the lead...I am trying to hold out to the new year.

A few pictures of a game with a group at On Military Matters...a great shot for wargames books and military history: 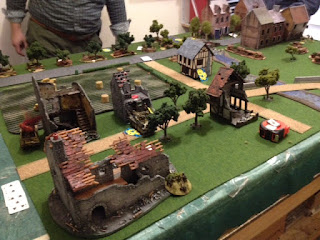 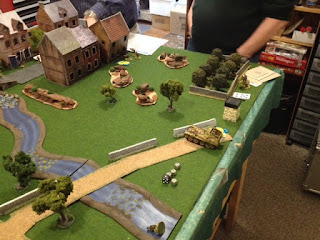 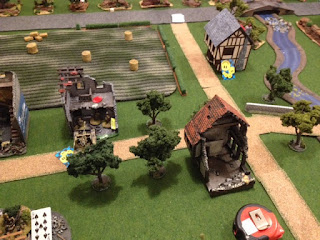 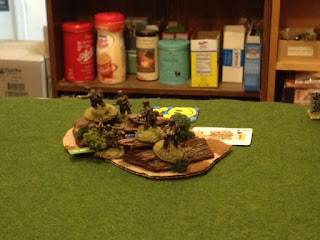 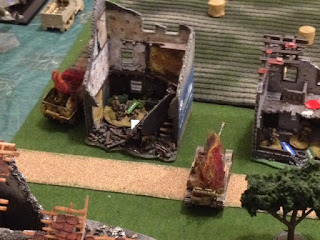 GAMES
1 game of WW2 skirmish at On Military Matters
PURCHASES and BUDGET
$204 this month: paint, TFL special, Pulp Alley campaign and cards, bases
Total for the year: $680
Budget: $420 under budget, Plan: <$100 per month; on target


Posted by Katzenstein at 4:06 PM No comments:

Last Summer,  I sold off all of the figures I purchased pre-painted to use as the opponents for my Kingdom of Katzenstein imagi-nations project. It is now time to reform an enemy force. I am going for a generic "Imperial" force that I can add onto as needed. I purchased a lot of mixed figures cheaply and I will form 95% of the army from this batch.

I can then add to these forces with small contingents from allied states and mercenary contingents.
Posted by Katzenstein at 3:52 PM No comments:

Another quiet month...and the second month in a row without any painting points. Where does the time go?

I am preparing my Christmas list for my wife. It will contain the usual round of wargames books and may for the first time include some figures (Pulp Figures).

My spending for the year is well ahead of plans. I will get the Summer and Winter editions of the Too Fat Lardies specials (PDFs), the new Pulp Alley "Tomb of the Serpent" campaign (PDF, some more Pulp Alley cards, and a small paint resupply. This should run me about $100 for the rest of the year.


PAINTING
0 completed :(TOTAL: 0 pointsIn Progress: 12 x 12 figure units for "The Imperial Army" in my Katzenstein project
GAMESNo gamesPURCHASES and BUDGET$65 this month: 2 bottles of paint and my Wargames Illustrated renewalTotal for the year: $476Budget: $524 under budget, Plan: <$100 per month; on targetReminder: bases (round), paint, and brush supplies...plus some shield transfers.
Posted by Katzenstein at 4:23 PM No comments:

Closed out the month with a solo game of Pulp Alley using the new solo cards. Very nice. There is so much to offer with the Pulp Alley system and supplements.

I saw a post on another blog about dice. Below are my original dice from playing D&D many years ago. An odd collection, but I have fond memories of that blue 20-sider. 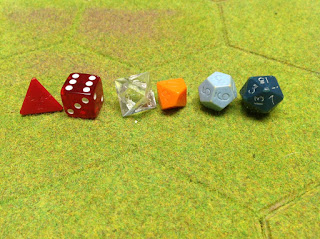 In Progress: 12 x 12 figure units for "The Imperial Army" in my Katzenstein project

GAMES
1 x Pulp Alley game
PURCHASES and BUDGET
$0 this month: Nothing! My Wargames Illustrated subscription is due in October.
Total for the year: $411
Budget: $489 under budget,
Plan: <$100 per month; on target
Reminder: bases (round), paint, and brush supplies...plus some shield transfers.
Posted by Katzenstein at 1:16 PM No comments:

I played a solo game of the third scenario in the Pulp Alley "Perilous Island" Campaign. This is the "At Death's Door" scenario involving a search in a customs warehouse for more clues leading to Lord Darrow's location.

The Duke's Tsarist Eastern Brigade approached the warehouse from the West while group of American mercenaries led by the mysterious Phantom Ace approached from the East. I rolled initiative to decide who went first each time, a slight change from the solo rules as published.

The Duke used his "call to arms" league perk and "wealthy" abilities to add three of Lord Darrow's college chums.


A fun and fast game with the solo deck. The action developed quickly with a big gun battle in the center, and then the action in the corner. Although the results seem lopsided, Phantom Ace and Mak were still in action at the end against The Duke, The Duchess, and Boris. My league leaders are not very combat oriented, so with another turn or two, Phantom Ace very good shooting and brawling) could have done some real damage.

The Duke will now follow the clues to search for Lord Darrow in Indonesia.

Posted by Katzenstein at 4:29 PM No comments:

I was invited to join some local gamers over the holiday weekend. Despite being distracted while simultaneously preparing for the storm, I enjoyed the game. The rules will be published shortly by On Military Matters.

I was on the British side at Pegasus Bridge. We took the bridge from both ends at the same time (as the recommendation goes), and held off two counterattacks. A few shots below...that MDF bridge is fantastic.

Unfortunately I had to leave before the 15mm Wild West game with "Dead Man's Hand" rules. 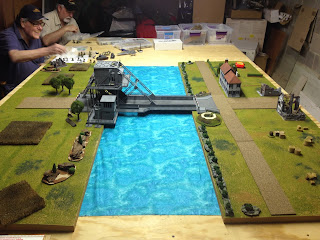 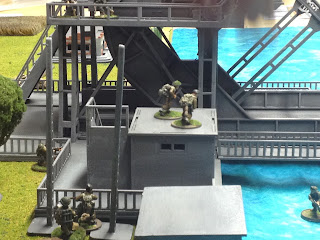 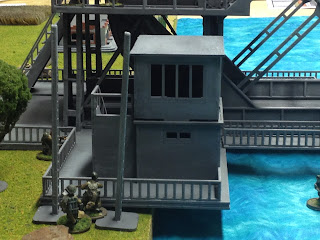 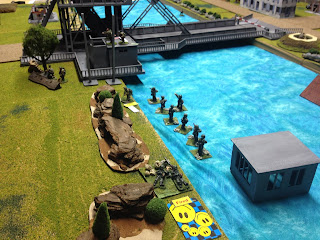 Posted by Katzenstein at 6:09 PM No comments: