A slow month with a little progress on the Pirates. I have an eye appointment this coming week...I think some new glasses are in order. I know the first seven months of this year will be a slow burn due to work commitments, so I am managing my expectations on painting and gaming.


PAINTING
0
----Pirates are still in progress. Working on flesh today. Have been using my new head light/magnifier. 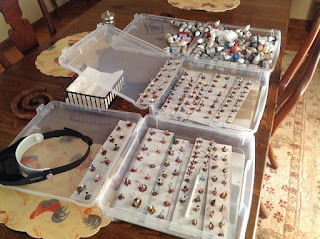 Time to look back at 2015 and make some plans for the new year. A long post below...I return to these posts each year to see how my interest in the hobby progresses.

This afternoon I will read the Too Fat Lardies Christmas Special and continue painting the 15mm Pirates.

Games in 2015: 14, Pulp Alley and fantasy games dominated my play at home

1- PIRATES! I have about 400 pirates, sailors, crewmen, and civilians and 4 ships. Get these done before Historicon. All primed and ready to go.
---Failed! Will continue to plug away in 2016. Not giving up on the project. I am half way done so far. This is #1 project for 2016. I have started them on my holiday break.

2- Texture the bases on the imagination figures...need to get off my butt and get this done. I figure this is about 12 hours of work.
---Done (and it took much longer than 12 hours)! I also sold off the figures I bought already painted so now my entire collection has been painted by me (with some help from JG). I will need to paint up opposition forces for the Kingdom of Katzenstein.

3- Attend Historicon. I especially want to get in another zombie game with my son, and a pulp game with the Pulp Alley rules. I don't think I will be able to attend Cold Wars this year (and Historicon 2016 is in doubt) due to switching positions at work and professional education requirements.
---Historicon was fun once again. No Zombies or Pulp Alley however. Plenty of fun with the PK crowd as always.

4- Cut spending by at least 20%.
---40% reduction! My drastic painting slow-down contributed to the reduction. I adjusted my spending target to <$100 per month towards the end of the year and I hit it. Overall great reduction.

6- Fantasy Rules. Although I keep searching just because I like reading rule books, the Piquet/Pulse of Battle/Hostile Realms rules meet my needs. I am going to pull the elements together into a single document and finish stating up all the fantasy units. Also make a custom card deck.
---Some progress but not done. Still bouncing back and forth between the HR rules, BYV, and my home rules.

7- Consider the next project...6mm sci-fi set at a company per base is the leading candidate....28mm Pulp has also caught my eye. So many options to choose from!
---Pulp joined the rotation. Pulp Alley is a great rule set and the Pulp Figures are very nice. Will continue to develop this project since it makes for a quick game and JG seems to enjoy them. 6mm sci-fi has continued to interest me...see below.

8- Manage the lead mountain. The pirates are all primed and ready, the Phase II Demonworld fantasy figures are stashed for the future, and a very small batch of 6mm sci-fi figures are in the ready drawer. The fantasy figures are part of a long range plan...for everything else, my goal is to paint any new figures within a year.
---Done...painted all of the small number of figures I bought this year (Pulp Figures), plus made a big dent in the Pirates.

Plans for 2016: Not as ambitious this time due to work and educational requirements

1- Finish the Pirates. Seriously this time.

2- Continue to tinker on my own Fantasy Rules.

3- Conventions: None planned this year...very sad to not be attending Historicon due to work requirements.

4- Budget: $1200 target for the year. Besides the usual books, magazines, and supplies, my only planned figure purchases may be the 6mm sci fi project.

5- Next major project: One of four options...A and B are in the lead.
a. Next phase of the fantasy project (start the Demonworld figures)---plenty of figures on hand.
b. 6mm Sci-fi---Currently has my attention, but I would have to buy figures.
c. Add the next 12 or so units to the Kingdom of Katzenstein.
c. Opposing forces for Kingdom of Katzenstein.

Katzenstein (imagi-nation): A mature project. I have planned expansions in two phases.

Zaquetta (fantasy): Phase 1 is done... 150+ units! I have a huge batch of Demonworld figures on hand and there are so many nice ranges on the market. This will be the lifetime project...I can always return to add units. I plan to purchase and paint all the selected figures from one company at a time to keep building up my armies.

Pulp: Added Pulp Alley in 2015. Great set of rules with lots of potential. My first foray into 28mm figures.

WW2: A mature project. Will pick up an occasional British or German unit or vehicle.

Krasnovia (modern skirmish) and Ziva (sci-fi skirmish): A mature project.  Basically it is one big individually mounted 15mm skirmish project with any sized force from squad to company.

Splintered Lands:  A mature project. My favorite miniatures. I am reading all of the Redwall books. Will add any new figures they produce.

Air Combat: A mature project. No planned additions right now but I do like float planes!

Zombies: Started with a small batch of zombies and survivors...plus I can use many of the modern/sci-fi armed figures and civilians. This is a backburner project designed for playing with my son.

Possible Future Projects: Not that I need any more projects, but these are some ideas I have for the future. (in general order of current interest)

A Very British Civil War: Love the though of developing my own forces and the alternate history. Would be a 28mm project that comes with it's own terrain headaches.

Wild West: Still a possibility, but only after the Pirates get done. Could be done with Pulp Alley.

Gladiators: would go 28mm with a custom built arena if I take the plunge.

Slaughterloo/Flintloque: love the figures, but not my preferred scale.

Model Casting: Considering trying out my hand with casting my own figures from molds.


Posted by Katzenstein at 6:23 AM No comments: