Completed a large sci-fi force this month and took stock for the rest of the year.


Next Up...
1) WW2 British company, individually based for IABSM


This should close out the year with both of these projects mature.

2013 will focus on ancients/fantasy although I will continue to add to the mature projects as I wish.

Posted by Katzenstein at 3:32 PM No comments:

A large company of sci-fi troops...these will be my main force. They are the New Vistula Legion troops from Oddzial Osmy. 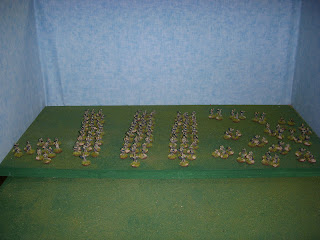 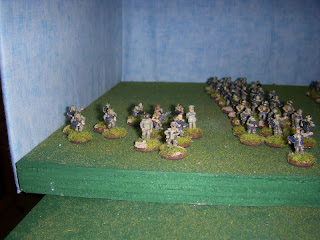 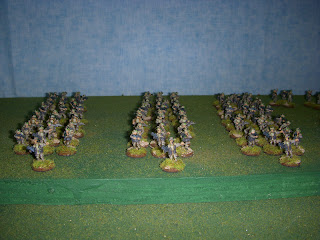 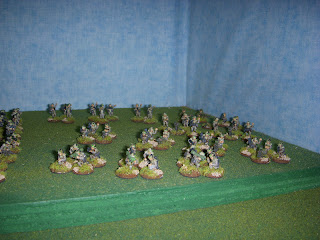 The manufacturer is working on some LRRP troops. I will also get some vehicles to make it a motorized company...thinking wheeled vehicles for these guys.

Looking forward to the new sci-fi rules from Too Fat Lardies to get the whole company in action.

I Ain't Been Shot Mum

I played a solo game of I Ain't Been Shot Mum from Too Fat Lardies. Set up a very modified scenario from the Scicilian Weekend scenario book.

A US para platoon with attached MGs is defending a crossroads. A German FJ platoon makes an initial attack with a PG platoon in halftracks and two STUGs coming on in support. Once the STUGs appear, the US side calls for a rifle platoon and two Shermans to come up in support.

I used my custom cards for the game. These consist of two large packs (red and blue sides) with generic cards for all the TFL games. Picture of my dig on the other side.

Only took a few pics in the game. The US MGs fired up the GE FJ at the begining causing lots of kills (more than shock) but two of the FJ squads managed to work in to some rough ground on the flank.

The PG platoon arrived and sped down the road only to have one track forced back by MG fire and another to dismount. The dismounted squad (along with the platoon leader) then got caught in the rough ground with the PL getting killed.

Things got better for the Germans as they took out one MG and forced another off the hill. The PG and FJ then massed to take the hill with the pillbox, catching one US para squad in the open in close combat.

By now, the two STUGs arrived and advanced down the road only to take bazooka fire. Shrugging off a few hits, they machinegunned the offending team and forced the US paras to begin falling back. Things looked good for the Germans at this point, but then the US reinforcements arrived.

The rifle platoon took cover behind the hills with the PL leading the bazooka team on a flank attack. He would end up getting two shots off at the side of a STUG, hitting once but not destroying it and then missing by 1 when running out of ammo.

The two Shermans slowly advanced and took the lead STUG under fire. They exchanged a few shots until the STUG crew at the crossroads bailed out after being immobilized and having the optics knocked out.

I called it a draw with a slight German advantage. They took the hill, and advanced to the crossroads, but with only one AFV left, might not have held on.

13 men lost per side including the one German BigMan.

Posted by Katzenstein at 12:38 PM No comments:

I have been taking stock of my projects and it is time to evaluate where they stand.

1) Katzenstein, Napoleonic imagi-nation: Mature project. I am going to terrain the bases in 2013 and I would like to make a small expansion (5 infantry units, 3 cavalry, a few generals). No timeline on the expansion, might be another year. I have not played a game with this force all year.

2) Krasnovia, modern/future skirmish: This project has bled over into one massive modern/future/sci-fi skirmish project. I can mix and match many groups of figures. We are using three sets of rules based on the size of the game. For squad level, Flying Lead, Tomorrow's War for platoon level, and the soon to be published Quadrant 13 for company actions.

3) Ziva,  sci-fi: Some info above...finishing a company sized force right now and that completes the on hand figures. I will make one more order from Khurasan including some vehicles and then take a break from this project in 2013.

4) WW2: Switched rules from Flames of War to Too Fat Lardies "I Ain't Been Shot Mum". The card driven system is great for solo gaming. I have figures on hand for a company plus of British troops to be painted (by end of 2012) and I may rebase the Flames of War US and German troops to individual mounts. This is a long term slow, slow growth project. I will pick up some more vehicles at the coming conventions. My son is interested in WW2 so this keeps him involved.

5) Starmada, spaceships: Mature...no planned additions. I have some ships I bought that can get sold off. Have not played a game on the Hotz matz.

6) Splintered Lands, anomorphic animal skirmish: A mature project...will keep getting new figures as they are released but not sure how many more are in the pipeline. Have yet to play a battle so this is more of a collection than a gaming force. It does have great warband/campaign potential.

7) Zaquetta, ancients/fantasy/midieval imagi-nation: This has morphed some over the past few weeks. I have ancients figures on hand for an imagi-nation type project but may expand into midievals and even fantasy figures. I have been inspired by Game of Thrones (just finished all five books) to include knights and the fantasy figues out there just make for interesting painting. This will be the 2013 focus project.

8) Pirates: Figures and ships on hand. Not sure when I will paint them. Includes a bag of period civilians that have multiple uses. Don't expect to do anything with this project for another year or so.

1) Napoleonics or Civil War, 6mm: I am intrigued by the 6mm figures but not ready to commit with so many other projects in the works. It would also require a change from my current 15mm only policy.

2) Wild West: I like the Blue Moon old west figures. A small collection could make for good games, but I may get  the same out of the pirates.

3) Old Schools Imagi-nation: considering a project with Spencer Smith miniatures as shown on many blogs and in the nostolgic war game books. The scale is an issue again as I would need more terrain and my Katsenstein project should meet the imagi-nation itch.

4) Flintloque, fantasy Napoleonics: I had this as a consideration but I think I will pass because of the scale (28mm) and cost.
Posted by Katzenstein at 9:07 AM No comments: