Just back from the Fall In convention at Lancaster, PA.

I stayed overnight this time and got in two games. Had planned on being in a 3rd but arrived too late on Friday. Bought lots of stuff...mostly buildings. Unexpected snow storm looks like it effected attendance.

Sat. 9:00:00 AM, 4 hrs, 6 players registered
GM: Steven Gelhard and the HAWKs
Napoleonic 15mm, Rules: Shako
Charles thought he knew where Napoleon's army was. He planned an attack with most of his Korps to envelop and destroy the French army located South of Ratisbon, Bavaria. The problem was that the French army was not there, but Davout's corps was and it was concentrating on Rosenberg's IV Korps, forming the Southern hook of Charles' pincer. Even worse, for Rosenberg, Napoleon was on his way there. How long can Rosenberg hold out?
---I was one of the two Austrian players and this was my first time with the rules. It was also my first group game and first convention game. Other than lossing two horse batteries because I did not understand the rules, it was a great game. Came down to the last turn when the French took the last two villages. I had bottled up one enemy division the whole game and made it a tough fight on the flank. We collapsed in the center early on and the broke down into two seperate fights. Good fun all around.

The second game was a Civil War action

Sat. 6:00:00 PM, 4 hrs, 6 players
GM: Tom Cusa
American Civil War 15mm, Rules: Carnage&GloryII
In an effort to crush half the Confederate army in Mississippi, Grant has divided his Army. As soon as Rosecrans makes contact the rest of the army will advance
---I was on the Federal side during this battle...1st time with the rules other than my solo play. We attacked early on but then by brigade took the brunt of the enemy attack. Held the line but were pushed back. I did use my cavalry to flank the enemy and slow down their reinforcing brigade.

Posted by Katzenstein at 2:03 PM No comments:

After a poor month in September, I got back in high gear this month and finished my generic 15mm modern skirmish figures for what I call the Krasnovia project.

This project is now mature but I do see some nice new figures out there such as the SEAL team from Khurasan.


I still need to base (on order) and dip the figures.

I also started on my first sci-fi figures and primed two ancients units.

I attended Fall In for two days but more about that in another post.

Plans for November include working on some sci-fi figures and maybe my first ancients unit. I also have a whole batch of Blue Moon and JR Miniatures Middle East buildings to paint. These will be used with the ME buildings from Miniature Building Authority to populate my sci-fi world.
Posted by Katzenstein at 12:59 PM No comments:

26 April- The Katzian voctory at Mario's Ridge on the 21st has set the stage for a critical battle in the campaign. While the Poo-Boochen forces are retreating from Farthing ford towards the border fort, a second Katzian division has driven into their strategic rear and may cut off the bloodied Poo-Boochen forces. Scraping together all available forces, the Poo-Boochen commander marches out to meet the oncoming force in the Nieder Valley. 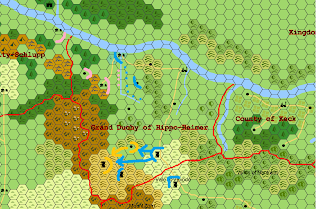 The stage is set for my next battle. Deciding if I am going to use Field of Battle 2 or Die Fighting. Will fight the battle sometime in November after attending Fall In at the end of October.
Posted by Katzenstein at 11:49 AM No comments:

After accomplishing little in September, October has been turning out very well.

I have finished the last of my modern generic 15mm figures for my Krasnovia modern imagi-nation skirmish gaming. Several different groups of figures including more police, some mercenaries, civilians, and many others.

This makes the Krasnovia project mature. By that, I mean that my on hand figures are done and I will only add to the project as the mood strikes. I don't consider any projects ever complete...just mature.

Next up I am moving into sci-fi and ancients. Have some figures primed and will start painting the Chewks from Khurasan today.

Pictures of the Krasnovia figures will follow when my Litko base order arrives.
Posted by Katzenstein at 12:01 PM No comments:

After having some of the gang captured while trying to buy some new weapons, the King's Grand Legion under the infamous Black Death Seamus prepare to launch a rescure operation by attacking the government forces guarding the local jail and police barracks.

Posted by Katzenstein at 4:46 PM No comments:


Some shots of my son's new clones in action on one of the side skirmish tables in the wargame room.

The Battle of Noahland initially went in favor of the Droid Army, but the Clones won for two reasons. The Droids underestimated the Clones and Clones outnumbered the Droids three to two. The images above are a small part of the mopping up operation at the end of the battle. Darth Sideous fled after the defeat of his Droids.
Posted by Katzenstein at 2:23 PM No comments:

I am jumping on the 15mm Sci-fi bandwagon. This has been on my list of projects for some time and I did buy a few figures when purchasing some for other uses ...saves on shipping. My wife asked what I wanted for my birthday and since the buildings I had asked for are not in production right now, I asked for some Khurasan sci-fi figures. I got a mix of their line to see what I like.

The plan is to play sci-fi with Tomorrow's War and Flying Lead. One for Company/Platoon games and the second for smaller scale skirmishes.

I keep up on the 15mm sci-fi stuff on Dropship Horizon and TMP.
http://dropshiphorizon.blogspot.com/

I will have an "imagi-nation" set up...or is that "imagi-planet"? Lots of different factions to take advantage of the great figure ranges now available.

http://bluemoonmanufacturing.com/index.php?cat_id=45
Posted by Katzenstein at 10:16 AM No comments: