A nice hobby month. Finished my planned painting, got in a game, and I have a full week off to get started on the next project. Looking forward to Historicon in two weeks.

1- 6mm Sci Fi
--- All on hand figures complete; may order all the rest to complete this project this year

3- Zombies
--- Will decide if I am going to start these next week.

4- Spending: Keep things to <$1000, plus Historicon expenses. Really need to abide by my budget this year. I know I will buy some 6mm sci-fi...but they are the only planned purchases right now.
--- Doing OK on my general budget, but I spent a huge amount on a project for 2019 :)

6- Fantasy Rules: continue to tinker and add in the magic and characters/leaders portion; use my new home card deck
--- Continued to tinker; moved everything over to google docs

8- Attend Historicon and check out NJCon
--- All set for Historicon, but had to work during NJCON

BUDGET
$18 on ASOBH supplements
$543 year to date
Posted by Katzenstein at 8:03 AM No comments:

Sir Miroslav and his hearty band of brave adventurers set off months ago across the Western Sea to search for the lost continent, hidden beyond the mysterious magical mist. After months of hard sailing, massive storms, and days on the doldrums, the explorers sighted land. Carefully moving along the jagged coast, he finally ordered the ship into a small cove surrounded by a low ridge. Disembarking a small expedition on the beach, he returned to the ship to make plans with his trusted advisers.

Meanwhile, several soldiers setup a beach side camp and prepared to search inland for game and fresh water.

Suddenly, a band of green devils advanced through two draws leading down to the camp. Taking up their weapons, the soldiers prepared to defend the camp.

So began the first battle in my Advanced Song of Blades and Heroes campaign using my newly painted wooden warriors. This was a fairly simple game using just the basic figures in each warband.

A massive swing of fate. The goblins had better fighters but started by losing three warriors including their best fighter very quickly. The momentum swung and soldiers started dropping. Sir Miroslav will have to rethink how he explores the new lands...and the loss of precious supplies is putting the expedition in jeopardy.

Although Talomir was slain, the spearmen Franc and Dueley quickly recovered. Ragnar the javelineer would need a few days to recover from his wounds. Sir Miroslav sends two men to sneak back to the campsite at night to recover Talomir's body. They find the camp looted and burned, scavenging a few odds and ends that the goblins missed. They return to the ip to bury their friend at sea and plan for the next landing. (Post battle I rolled "corpse" on the exploration table...and then rolled a 1 on the 1d6x5 gold).

Posted by Katzenstein at 3:15 PM No comments:

Finished the next batch of figures...a band of goblin warriors.

Time for the 1st battle.

Posted by Katzenstein at 2:57 PM No comments:

First batch complete...my set of fantasy adventurers/explorers. I am working on their first opponents, a tribe of goblins. Goal is to finish them this month and start gaming in July before Historicon.

My vision for this project is a hex crawl exploration game in which the explorers seek to colonize a new land...running into all sorts of trouble along the way.

I am thinking about three sets of rules, and I will try them all:
1- Advanced Song of Blades and Heroes
2- Savage Worlds
3- Pulp Alley

The inspiration for this project came from the fantastic work at:
https://wooden-warriors.blogspot.com/

While researching for this project, I also came across some folks gaming with Lego figures...very intriguing with the customization options and the 3rd party accessories being made.

My first scenario will be with ASOBH as the explorers have just set up camp on the beach of the new lands...time to start exploring inland.

Posted by Katzenstein at 8:45 AM No comments:

Finished up basing all the on hand 6mm sci fi forces. This makes it a mature project but here are some holes I can fill over the next two years.

Next up...thinking about what to work on next. I have the huge 15mm fantasy pile of lead...plus two smaller projects. I think I will work on the Wooden Warriors and then the Zombies. This should take me into the Fall and I can decide if I start more finish the 6mm sci fi project, continue the 15mm fantasy project, or begin Project X.

I registered for Historicon in July. At least 6 games in my plans including FOB, Peter's Campaign in a Day, and Combat Patrol. 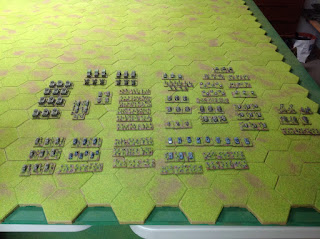 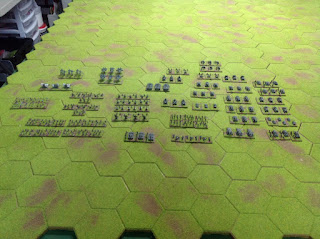 GAMING
Lots of thoughts...but no gaming :(

BUDGET
$0 for the month

Posted by Katzenstein at 10:42 AM No comments: