I have focused on the 15mm sci-fi project this month and will continue to do so over the next few months. The ancients project will be on hold until I get the sci-fi project to maturity.

I will finish painting the on hand sci-fi figures in Feb, with the next round of figures about to be purchased. I see them taking me through June.

Good start to the year helped along by starting the first batch in the last few days of December.

I am exploring the I Ain't Been Shot Mum rules series...may replace Flames of War and maybe Force on Force/Tomorrows War. I like the idea of having a company on the table and tracking individual losses. The card driven system is also a plus...like Field of Battle.

Not sure if I will attend Cold Wars or not...I would like to get another game of Carnage and Glory .
Posted by Katzenstein at 3:23 PM No comments:

More GZG figures...they are good for security forces, colonial police/militia, guards, or maybe as I painted them to be a peace keeping force. 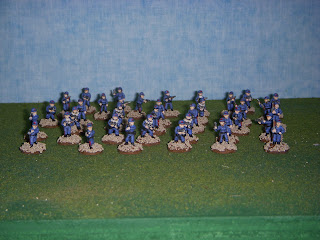 Posted by Katzenstein at 2:54 PM No comments: 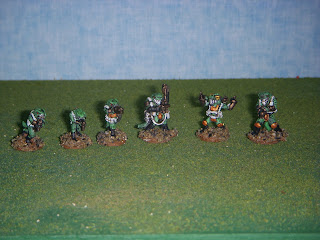 2012 will see lots of work on my sci-fi figures. I have all the on hand figures painted or primed ready for the next three months.

Once these are done, I will get the second round of figures and work on them as I start my ancients.

I have dubbed this project..."Ziva".

Got in my first two games with the figures I have painted so far...the first was a solo game and the second on the same board with my son.

Game 1:
A squad of Ripley Corporation reaction corps troopers (Khurasan Exterminators) is headed to investigate reports of a shuttle crash near a local settlement in the green zone. The shuttle crew survived and has taken refuge in the settlement. A nearby tribe of Chewks (Khurasan Chewks) is hell bent on capturing the crew for ransom and especially getting their hands on the droid they spotted.

Things go south for the squad as they quickly suffer some losses including the squad leader. Luckily the shuttle crew holds off a Chewk charge and manages to wait out the attacks.

Despite some bad activation rolls (we were using Flying lead rules) I got troops in a position to overwatch the settlement and used my armed drone to intimidate the enemy.

My son called in an evac shuttle and charged out with a small team (reinforced by two allied Chewks he claimed were para-Chewked in to help) only to be met with a wall of fire. [This little incident will provide some fodder for my campaign...who is arming the Chewks and why have they become allies?]

Called it quits at this point with heavy losses.
Posted by Katzenstein at 4:12 PM No comments:

Another squad from Khurasan Miniatures. These are some of my favorites...a good mix of sci-fi and modern look. The drone is a nice touch. 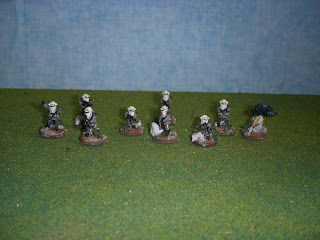 A great year of painting and gaming. Completed my second Imagi-Nation campaign along with some skirmish games.

These join the Flames of War project as generally complete.

Focus for 2012 will be on the ancients imagi-nation and sci-fi skirmish.

Other big tasks include painting a large batch of middle east buildings and texturing the bases on my painted figures. I also want to try making some scatter terrain to liven up the table.

I plan to attend the three HMGS conventions including a four day stay at Historicon. I played my first two convention games at Fall In 2011 and had lots of fun.

2- Spend less- focus on accessories vs lead and terrain --- FAILED, I did buy less figures and I have cut down my lead stock...but I spent way to much money, especially on terrain (buildings). Will work to do better this year...figure purchases will be kept under control until I finish painting the figures on hand.

3- Complete several projects before starting any new ones --- ACCOMPLISHED

PROJECTS
Ancients
- Decide on a rule set...the pending Pulse of Battle is in the lead
- Begin painting...one unit a month is a good target

Sci Fi
- Paint all on hand figures
- Continue to expand...will make a round of purchases when done all on hand are done
- Begin looking at vehicles

Terrain
- Paint all buildings
- Put together the paper terrain I bought at Fall In 2011
- Build 12 terrain pieces (fields, rough)

Katzenstein
---I am planning a small expansion to the Katzenstein project. I painted up 3 white coated regiments as a semi-autonomous religious state and I want to expand the force since I liked the figures, I liked the simple white paint scheme, and I can't help myself from buying more figures.
- 1 Line Regiment
- flag bearers for existing 3 regiments
- 1 Grenadier Regiment
- 1 Light Regiment
- 1 light cav (Cossack) regiment
- 1 Horse Grenadier regiment
- 1 arty battery