This is the basic idea behind a new project I just started using plastic 28mm historical and fantasy figures and the conversion animal heads from Sally4th. It is inspired by some of the concepts from Frostgrave, but I want more of a map based exploration campaign. I started something similar with my Wooden Warriors project, but the possibilities with the plastics and conversion parts took me in another direction. I also want larger groups of figures with leaders/heroes, and lots of rank/file. More along the size of Dragon Rampant.

I am thinking there can be an individual skirmish component along the lines of Savage Worlds-ASOBH-Frostgrave, and the warband level battles with the "characters" each leading their own squad sized unit on the battlefield. I can even include Pulp Alley.

I may ask the very creative online community for some suggestions on how the campaign unfolds. It will be a narrative campaign that sees things go from the initial landing, to exploration, and the founding of a small colony (and bigger battles). There will be local beasts/monsters, tribes, lost cultures, traditional enemies (goblins...), and rival explorers/settlers.

The mystic vale has fallen to reveal long lost lands far across the sea. Now all of the kings, princes, priest and guilds, not to mention pirates, adventurers, and explorers, are staking claims in the rediscovered continent. Ancient cities, ruins, temples, and other locales are ripe for exploration. The quest to return to the lands of myth is led by the Antros, animal-human hybrids that originated on the forgotten continent long ago.

For hundreds of year, the mysterious, seemingly impenetrable mist over the Western Sea resisted all attempts for brave souls venture forth to explore the lands of legend. Only recently have the mists begun to thin, allowing daring bands of adventurers, clergy, explorers, merchants, and bare do wells of all colors to sail West in search of glory. All of the power brokers in the lands, from kings to high priests, from guilds to wizards, from common folk to criminals are now venturing forth across the sea. The newly discovered continent, or rather, the rediscovered lands of myth and lore, is sure to bring glory, wealth, power, and in most cases, death. Leading the quest to return to the old lands are the anthropomorphics. These hybrid human-animal folk are long thought to have been created by the mighty sorcerers in the forgotten lands, only to be cut oﬀ when the mist descended between the great continents. Many brave exploration parties have sailed never to be heard from again. Despite this, more sail each day, and reports are spreading of successful voyages across the sea...with tales of strange beasts, forgotten cultures, great wealth, and great heartache.

The crew of the Flying Fish under the command of the otter-anthro Sir Miroslav has just completed a three month journey through the mist. Clearing the dense fog, “Land Ho”! Rings out and the ship makes for a large height overlooking a potential landing site.

The ﬁrst game was a small encounter between the ﬁrst explorers put ashore by Captain Miroslav and some savage natives. I used Savage Worlds rules. 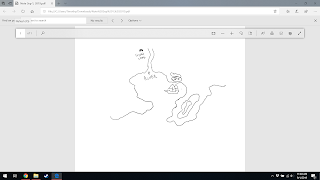 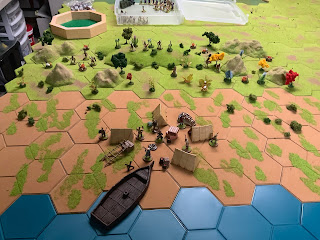 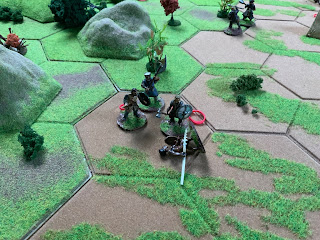 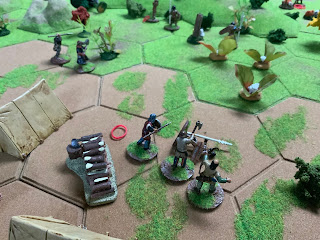 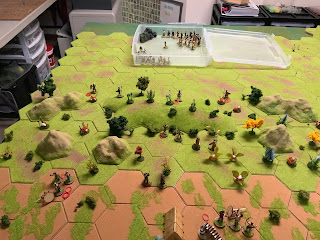 Ruffus led a small band to explore the landing site. Pitching camp near the beach, they were soon confronted by savage natives. Ignoring attempts to communicate in the common tongue, the forces quickly came to blows. Ruffus' crew saw off the enemy killing two of their number and wounding several more. Hilde has been wounded, but she help off two of the savages, killing one. Boris killed another with his axe. Ruffus has started construction of a small redoubt on the far dune, while sending Hilde and Ali back to notify the captain of the attack.

Posted by Katzenstein at 8:43 AM